"I gotta make a (commission) living, too"

These epigraph statements came from the same, now fired, financial advisor. The first one was in response to me describing my careful spend rate -- which I will humbly assert was pretty well-informed at 57 when he said it...after more than 5 years of me doing this blog -- that was designed to confront my long-horizon superannuation risk since I have no major hedge like a pension or annuity. The second statement came not long after -- this after 25 years of paying something like a point and a quarter, btw -- when I insisted that we discuss (negotiate, reduce) fees. After my divorce and retirement fees became an absolute yoke and on the forefront of my consciousness because fees are no more and no less than part of our spend rate.

I did not choose this dude, btw.  I'd had the same advisor for > a decade. I trusted her. Then, as net worth went up she eventually handed me to another guy in the Wells Fargo private/IFS system. Ok, I guess, sure.  I came to trust him, too, though. Then I told him a couple years later: "Hey, I'm getting divorced and moving, can you help me handle the (complex) split process? Him: "Don't worry about it, I totally got this." I believed that when he said it.

Then, right in mid-stream of my traumatic divorce and the GFC market crash he disappeared and I got orphaned. No one was on point except some amorphous "team." The "team" -- a bunch of 20 something back office types -- totally messed up the divorce split. I told "the team" exactly 5 times what the lawyer had told me to do: "split first, equalize second." So what happened? The reverse, of course. The difference in the two methods was something on the order of 2-3 years of retirement consumption.  So non-trivial. That and they then: a) refused to help repatriate my money (that was my problem now), and b) threatened to bring in the Wells Legal team against me immediately after I asked if this was a litigation kind of thing. I was just asking (maybe a little provocative, but whatever) but the WF legal threat seemed a little heavy handed and a little quick for a crew that should have been apologizing and trying to solve the problem.

Because I bitched about all this, WF sorta rallied and gave me another advisor. Fine, great guy. But then he left WF, too (for the platform that I am on now, fwiw, leaving for reasons that I gather were not all that dissimilar in some way to my own experience). Eye roll to my "institution."

Then after all that I got handed as a last resort to the quote-dork who then proceeded to condescend and insult. If he'd had anything remotely resembling skills, capabilities, respect, empathy, judgement or social sense I might have stuck around since I am a creature of habit. But even nice guys have their thresholds so I fired him shortly after the epigraphic quotes above fell from his lips.

I went to another mainstream fiduciary. I wondered if I should just do it myself but they not only negotiated rates, they came up with an account structure and a plan that fit my early retirement and post-divorce situation. Now today, I could probably save a few bucks and do this myself. I'm pretty sure I can and maybe some day I'll look at that given that fees are a steep hit on spend capacity. Back then I just needed some stability.  Now that seven years have passed how did it all work out?

In the figure below the dotted line was when I fired my advisor. Seems clear that changing advisors helped. It's probably something I would have done anyway and whether I could pull this off on my own is TBD.  For now I'll just say good riddance to quote-guy. The runup on the right is mostly due to a conservative asset allocation and the payoff structure of some trend-following strategies that started to do what they are supposed to in late 21 and early 22. Gamma refers to a David Blanchett paper that made the case for both the soft and quantitative contributions of advisors. 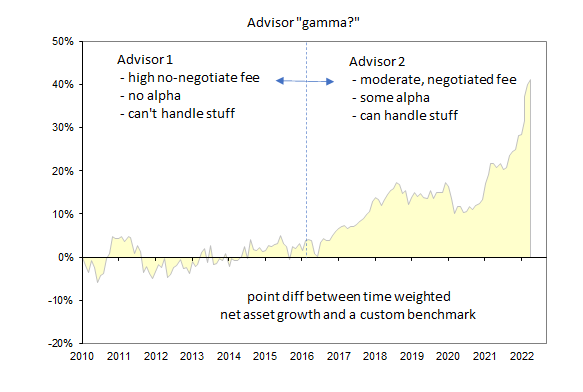 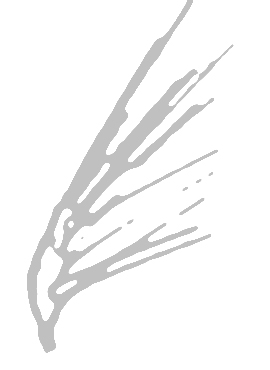 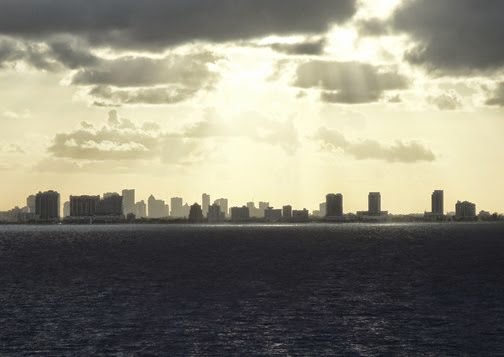